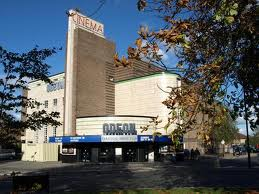 YTI’s first social event of the autumn was a trip to see the National Theatre Live showing of “One Man, Two Guvnors” at Harrogate Odeon on 15th September. National Theatre Live has been going for a couple of years and is a wonderful way for those of us living far from the bright lights of London to see top class theatre, and “One Man, Two Guvnors” certainly was top class. It is a modern adaptation of “The Servant of Two Masters”, which was written by Venetian playwright Carlo Goldoni in 1743 and is in the Commedia dell’Arte tradition. The Harlequin character was played hilariously by James Corden. 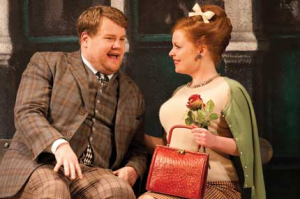 Seven members of YTI attended the showing, with various family members and friends doubling the number in the party. We all laughed till our sides ached at the crazy goings-on on stage, as James Corden’s character tried to keep from each of his two masters the fact that he worked for the other as well.

About two-thirds of the party preceded the play with a visit to a café near the cinema called DevilAngel. This newly opened café proved an excellent venue, providing very good food and service, and indeed opening later than usual especially for our group, who were the only customers at that time in the evening. If ever you’re in Harrogate, it’s well worth a visit. 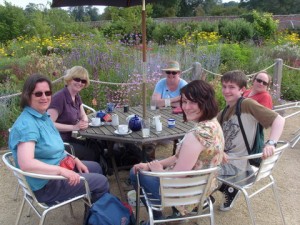 On Sunday 31st July, a group of 5 YTI members, Wenke Geddert, Catherine Greensmith, Alison O’Neill, Helen Robertson, and I, plus my teenage children Rebecca and David, met for elevenses at the Vinehouse Café, Helmsley Walled Garden, and then set off to walk the two and a half miles from Helmsley to Rievaulx. This is in fact the opening two and a half miles of the Cleveland Way, and is very well-maintained and signposted. Surrounded by beautiful scenery, with good conversation, and lovely sunny weather, this was a most enjoyable walk.
When we arrived at Rievaulx Abbey, those of us who hadn’t brought a packed lunch were able to buy something at the Abbey shop, and we all repaired to a delightful spot by the river to eat it. Alison’s dog took the opportunity to cool off in the water!
After a leisurely lunch we set off to walk back to Helmsley, a great view of the castle greeting us as we approached our destination. When we arrived, we stopped off at the Vinehouse Café for further refreshments and Wenke took the last of several photos before we all went our separate ways.
I’m sure all those who took part in the walk would like to thank Alison for suggesting such a good route and for organising it so efficiently. On a personal note, I would like to say how much my children and I enjoyed it and in particular, to thank everyone else who took part for making Rebecca and David so welcome.