The last time I ventured onto the grounds of the Yorkshire Sculpture Park was back in 2008, when I took a friend on what turned out to be a decidedly wintry day out. A repeat – and hopefully warmer – visit was long overdue, so I jumped at the chance to join October’s YTI-at-YSP social.

We met for lunch in the upstairs restaurant, where the large portion sizes took up as much of the conversation as translation, interpreting and more off-topic subjects. As the time came to venture back outside we decided to divide into smaller groups to allow for the different routes (and paces) preferred within the wider collective. We set off on our various explorations, agreeing to regroup later at the café. Some headed straight to earmarked features, map-in-hand, while others stopped to explore the Not Vital exhibition in the Underground and Garden Galleries. 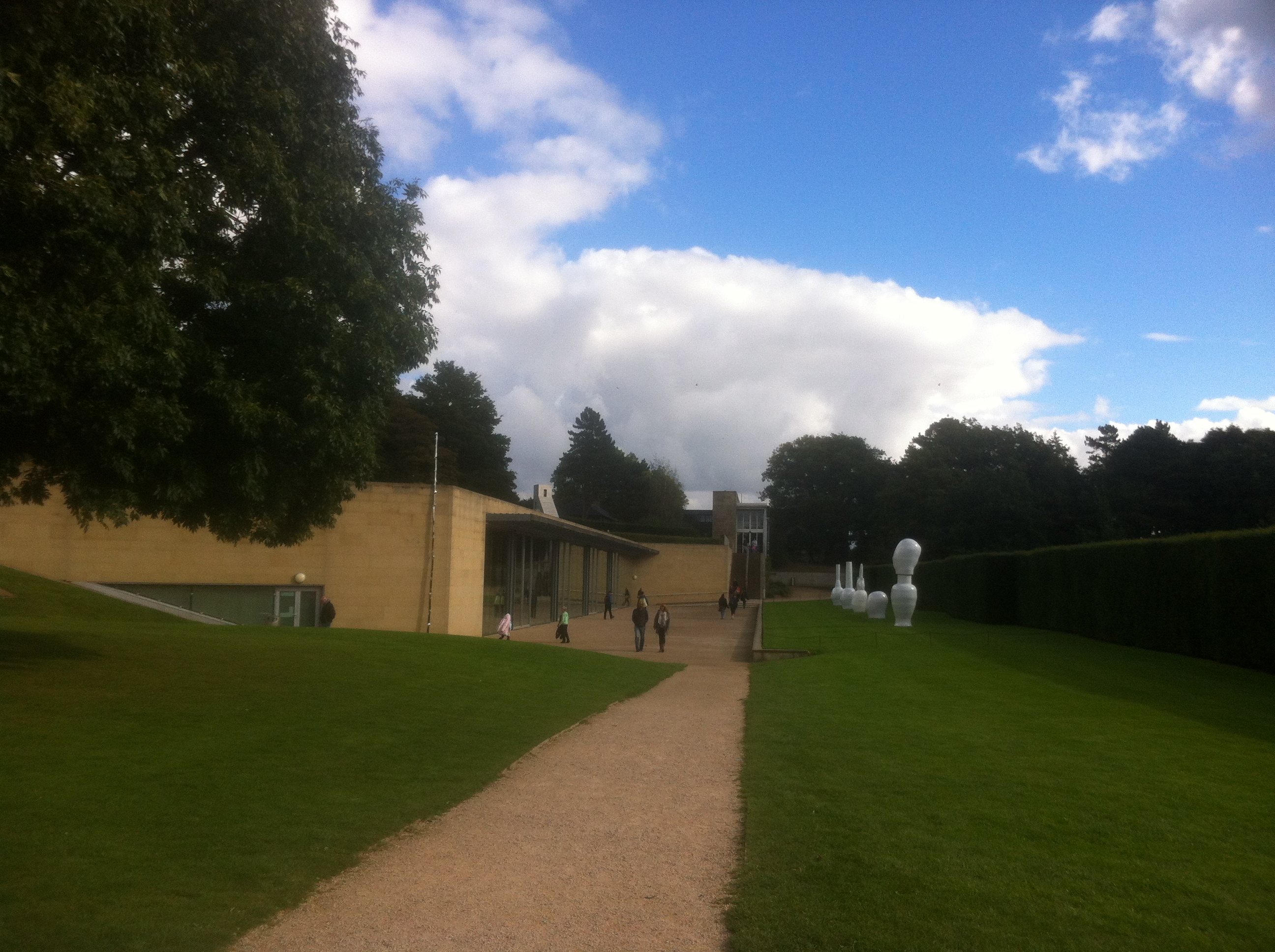 Our group walked along the western side of the park, encountering such features as the Cascade Bridge, Stepping Stones and the Greek Temple – as well as some curious highland cattle, from which I for one made a hasty retreat! It was interesting to read the history of the park’s features (such as the boat house, originally built at the head of a lake but now landlocked due to the changing landscape) and the various sculptures dotted around.

The sculptures themselves almost blend into the atmosphere at YSP, such that, despite pausing to reflect on each one, you can come away not quite realising how many works you’ve seen. Examples include Richard Long’s Red Slate Line – a fairytale path in the woods just daring you to take a forbidden step onto it’s terracotta surface – or the familiar, yet unusual view granted by Helen Escobedo’s hazy red bales of hay scattered across a field.

There are delights that capture the younger audience’s imagination as much as the adults’; a grotto-like pathway opens out to the colourful mosaics of Marialuisa Tadei’s Octopus, and children flocked to watch an equestrian outline canter across a screen in Julian Opie’s Galloping Horse. I even noticed one little girl dancing delightedly in time to its motion.

More prominent features included, of course, the steel forms of Not Vital’s work; the imposing, spherical Moon, whose smooth ‘craters’ evoke a sense of raindrops, or the fascinating cylindrical repetitions of Let 100 Flowers Bloom. Other ‘stand-out’ elements were the polished surfaces of KAWS’ pieces, contrasting with both their cartoon-like shapes and perturbing postures. 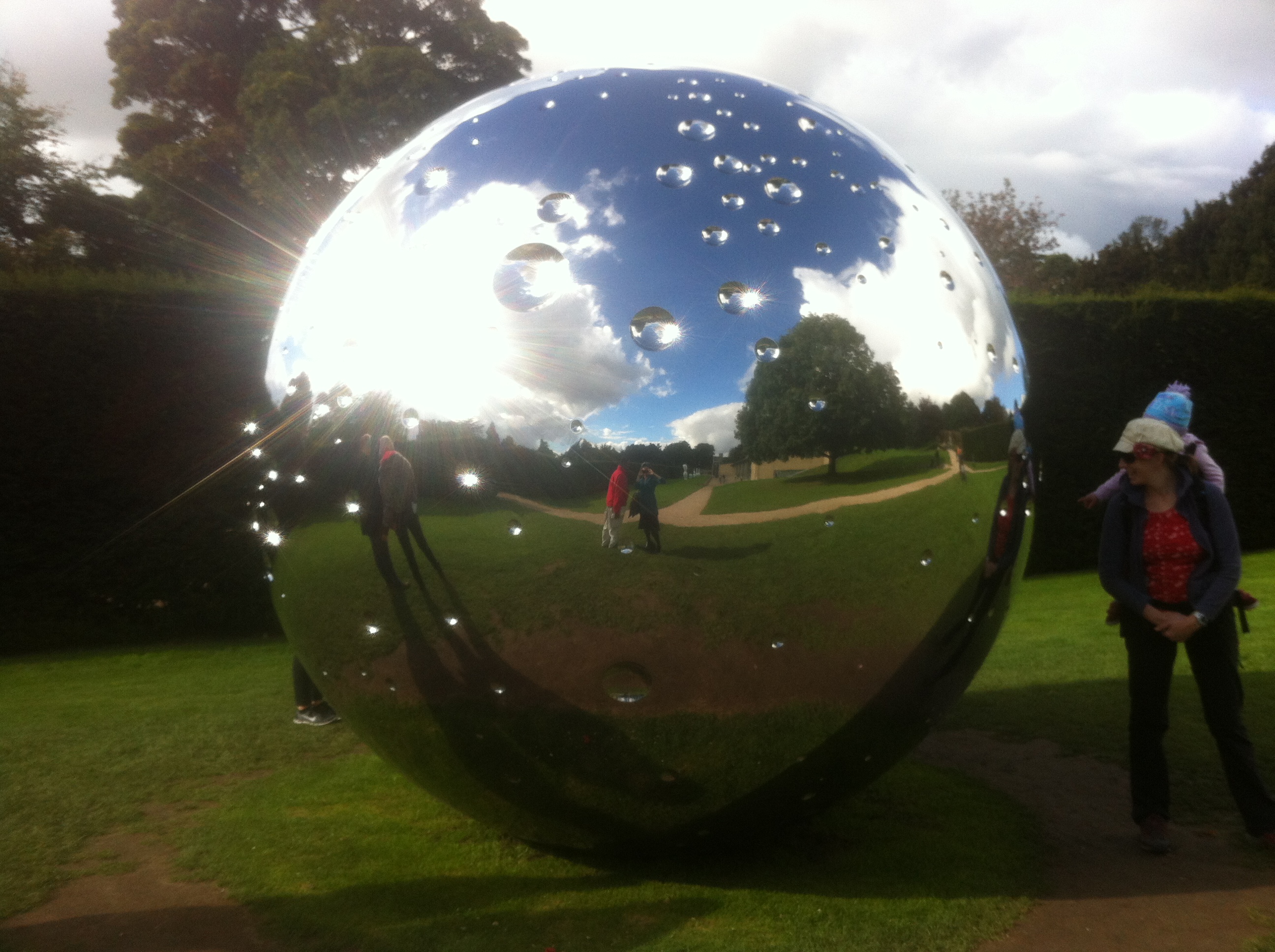 At the appointed time we headed back to the afternoon rendezvous point, where several members were already assembled around a picnic table – some enjoying ice-creams, no less! All seemed to have enjoyed their various wanders, and as people started to think about heading home, the approaching dark clouds gave a nudge to any who were in two minds. The downpour started as the last of us were leaving; for the most part we’d had an unusually fine day, perfect for outdoor exploration, and a delightful setting for getting to know colleagues old and new, their spouses and families.