Saturday 25th March saw students and professional translators and interpreters alike assemble in the interpreting suite at Leeds University for a day of CPD in interpreting. The turnout was good, despite the tempting sunny weather outside, with a wide range of nationalities represented. The day was organised in two halves: the morning was an opportunity to hear veteran interpreter Martin Esposito discuss sustainability (or lack thereof) in the interpreting profession, followed by a practical session in the afternoon giving attendees the chance to interpret a variety of speeches in different languages using the university’s booths and some of Martin’s technology.

Having trained in interpreting five years ago, but worked solely as a translator ever since, I was curious to delve back into the glamorous world of interpreting and update my knowledge. The morning’s session was fascinating, offering a glimpse into the exciting career of a successful interpreter. The main message that I took away was however that interpreting as it stands, whether conference interpreting or interpreting on the private market, is somewhat unsustainable. Martin cited the difficulties that interpreters experience maintaining relationships when they are constantly travelling internationally, preserving their health (ear infections were mentioned frequently as the bane of an interpreter), maintaining their waistline and retaining clients in today’s price sensitive market – particularly when a non-native CEO decides to have a go at speaking in bad English rather than using their trusty interpreter.

Martin’s suggestion to combat the latter issue is to add value to the interpreting services you provide to the client, such as doing voice overs and translations for them, creating cloud-based glossaries for their use and even acting in a consulting capacity. In short, making yourself indispensable. In particular, though, he stressed the need for interpreters to be as self-sufficient and easy to work with as possible. After all, wouldn’t you rather work with a service provider who got on with the job and solved any issues themselves? In this vein, Martin discussed and demonstrated some pieces of technology that are a must have for an interpreter’s tool kit. Some were hardware, such as the smart pen that records a speech while you write notes and then plays it back when you select a section, and some were apps, such as an amplifier app to help in a situation where an interpreter cannot hear the speaker clearly. This was a recurring theme, and Martin showcased some different headphone and microphone options to facilitate an interpreter’s work in the most challenging audio situations. The bone conducting headphones, which sit a little in front of and above your ears, were particularly popular, with interpreters clamouring to try them out in the afternoon. 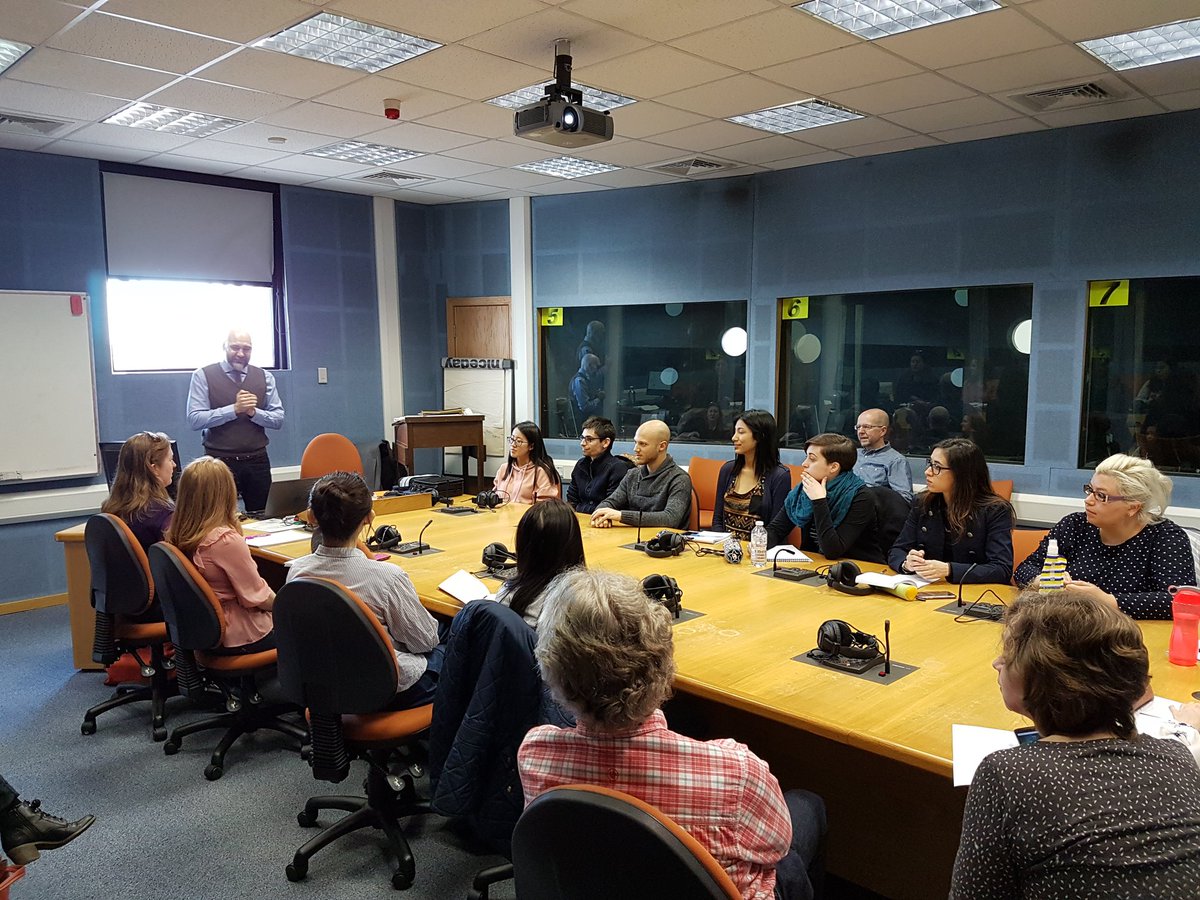 After taking full advantage of the scrummy catering provided by Opposite Café with plenty of time to natter as linguists are wont to do when they get together, we headed back to the interpreting suite for some practice. After so long out of the booth, I was rather nervous about getting back on the interpreting horse, particularly surrounded by so many aspiring and seasoned interpreters. While I am most certain that everyone else found the practice most useful, I have to admit that the experience (and the stress of trying to listen and speak simultaneously AND make some kind of sense at the same time) has not inspired me to leave translating behind. However, Raquel had prepared a wide variety of interesting speeches to practice with, and there was some very impressive interpreting going on into a whole range of languages.

In all, it was a thoroughly enjoyable day and fascinating to get an interpreter’s take on the language industry and its future. I would like to say a big thank you to our speaker Martin for giving up his Saturday to talk to us, and particularly to Raquel for organising the whole day, and, very importantly, the delicious food!