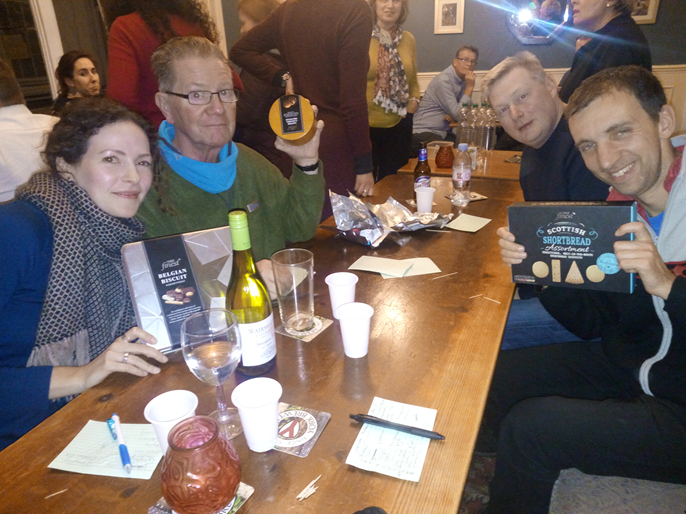 On Friday 10 November a flock of YTI members descended on the Yorkshire Terrier pub in York for our annual internationally themed pub quiz.

After getting drinks and the odd sausage roll from the bar, everybody got settled in the function room upstairs, the more resourceful/organised of our members having brought food to keep them going after the pub announced rather belatedly that no food would be available. A shame, as in previous years the rather hot chilli con carne proved very warming sustenance for the cold and dark of November. Thankfully the second part of the quiz came to the rescue. More on this below…

Once settled into five teams of 4-5 people each, the first part of the quiz got under way under the ever capable direction of quizzmistress Catherine Greensmith. The first part consisted of questions with an international flavour, some rather unusual. King Zog anyone? Turns out he was an Albanian king some for the attendees had even heard of before (do feel free to pat yourselves on the back!)

After a short break (during which £18 were raised for Translators Without Borders) came the second part, which was a flavoured water and cheese tasting session. The waters were rather unusual combinations which took some divining, while for the cheeses identifying the country of provenance, as well as the variety, gave extra points.

There were prizes for three teams –one item per person, no less, that’s YTI largesse for you– with the five-strong Quizzettes proclaiming themselves overall winners (picture of team members proudly displaying their prizes below. Clockwise from bottom left: Helena, Steve, Chris and Mark, with Alejandra on photographer’s duty).

A very enjoyable evening where a good time was had by all, and our gratitude must go to the Organising Committee for making it happen. Looking forward to next year’s already, for which some of our members suggested the inclusion of some Japanese-themed questions for variety and general broadening of horizons. Which is what it’s all about.