On February 11th, I set off on the train from Leeds to join a group of fellow YTI members for a visit to the Bedern Glaziers Studio (http://www.yorkglazierstrust.org/). This disused medieval chapel was converted by York Glaziers Trust and is home to their team of glass conservation specialists, who are currently working to restore York Minster’s Great East Window.

Due to the signalling problems affecting Leeds station and forcing our train to take a detour along a slower line, two of us arrived 10 minutes late and missed the beginning of the talk. Despite my concerns that I would then find it difficult to catch up, I was soon enthralled by this informative glimpse behind the scenes of glass conservation.

The in-depth talk delivered by one of the conservators covered each of the stages involved in this ambitious project, including cleaning, repainting, firing and re-glazing (where necessary) the panels of this impressive window. Its panels depict the beginning and the end of the world and were originally painted by John Thornton, a glazier from Coventry. He completed the entire piece between 1405 and 1408, delivering it on time in order to secure his bonus of £10 (worthwhile, considering he was paid a total of £46 for his work – roughly half a million pounds in today’s money!)

During the visit, we were shown close-up images of particular panels in order to illustrate the techniques described, and even given a quiz that involved guessing which figures were original Thornton paintings and which had been repainted (with varying degrees of success) during the 1950s and 60s conservation project. Explanations of the conservation process also mentioned the specific terminology for the materials, tools and techniques used. Here is a little sample of the fascinating content:

The talk was the perfect blend of technical information and anecdotal interest, interspersed with a chance to watch conservation work in action, with two other members of the YGT team working on cleaning and glazing processes on the other side of the glass screen. Each explained the work they were doing, and all three conservators were happy to answer questions before we left. They gave a real insight into their varied expertise and backgrounds (which include art, art history, glass conservation and archaeology) and the meticulous work they do day in, day out… not to mention the skills and patience involved, with one panel taking at least one full week to clean! We heard how the project aims to painstakingly restore as much of the original medieval glass as possible, using many of the same techniques but also taking advantage of modern materials and techniques in order to protect the window for many future generations.

Everyone who convened at nearby Café Concerto to sample some of York’s finest coffee and cake agreed that the tour had been a thoroughly enjoyable, enriching and refreshingly different way to spend a Tuesday afternoon! A wonderful CPD idea – thanks to the organisers as always! 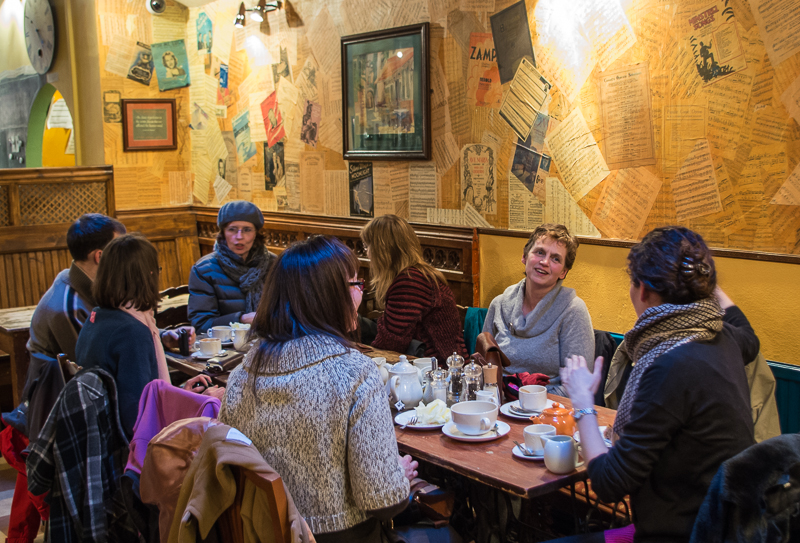